Let’s Call It a Day 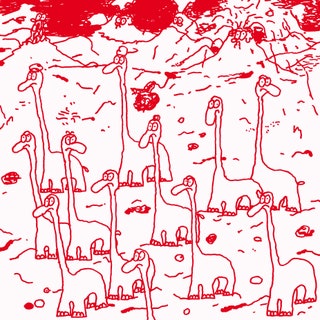 The pieces on this reissued 2006 album blend techno’s forward motion with the swirl of ambient.

One afternoon in 2007, the electronic musicians David Moufang (aka ) and walked into the Smallville Records shop in Hamburg and heard their own music playing over the speakers. The record in question was Let’s Call It a Day, a one-off set of dubby ambient-techno improvisations that had been released the year before and then disappeared without much trace. In town for a rare duo performance together, they told the shop attendants that there was a bounty of unreleased material from the same sessions sitting on their hard drives, at which point the storekeepers pricked up their ears. The following year, some of those tracks would be released as , the inaugural album on the fledgling Smallville label.

Specializing in moody, minimalist house, Smallville was inspired by Dial Records, a Hamburg dance-music institution, even tapping Dial co-founder for one of Smallville’s early singles. But after its early run of singles, Songs From the Beehive marked a turning point for the label. Instead of the crisp beats and clean lines of the minimal scene, these recordings were shrouded in gaseous abstraction, like architectural photographs shot on fogged film. The dancefloor tracks invoked heady dub-techno pioneers like ; the rest of the album slowed the tempos or eliminated beats altogether, sinking into a state of weightless bliss. There was nothing else like it around at the time, and it established Smallville’s reputation as an .

This reissue of Let’s Call It a Day marks the first time the 2006 album has ever appeared on vinyl or streaming services. It’s opportune timing; ambient music is enjoying a renaissance right now, and Move D and Brunn’s album, with its careful mix of pulse and atmosphere, still sounds unique. Even more than Songs From the Beehive, Let’s Call It a Day achieves an unusual balance between techno’s forward motion and ambient’s amniotic swirl.

The album begins with its most sharply defined track. A listener hearing “On the Magic Bus” in 2006 wouldn’t have been completely befuddled; its steady kick drum and answering bursts of white noise approximate dance music’s familiar boom-tick rhythm, while rounded bass tones invoke deep-house pioneer . But the whole thing seems suspended in liquid, like the flakes of a snow globe. From there the duo leaves all semblance of the club behind. “Grains” is stirred by a buried dub-techno pulse and a hint of a ticking clock; the rest of the track is just a shimmering field of randomized rattle and squeal, as though a transistor radio had suddenly developed a keen interest in free jazz while the two musicians went on their lunch break. “A” and “Ω” are variations upon a single theme, hypnotically drawing out murky, burbling chords over rustling rhythms.

Like Songs From the Beehive, all seven tracks were improvised across four days in Moufang’s studio, but the album’s two highlights show what different forms those freeform sessions could take. “Let’s Call It a Day” is the album’s most ethereal cut, with faint synth chords slowly morphing atop a soft bed of clicks, purrs, and sighs. Trying to trace its creators’ movements is like looking for a guiding hand behind the movements of a lava lamp; it feels like it could bubble along like that for eternity, generating infinite permutations of the same basic pattern. “Magnetically Levitated Train,” on the other hand, constitutes the record’s big emotional payoff: a patient series of jazz-indebted chord changes drawn out across 17 soothing minutes, played with unusual delicacy and imbued with an unmistakably human touch. At the end of a record that feels almost a self-regulating system—some fantastical Rube Goldberg contraption made from an aquarium pump, marbles, and Q-tips—this sweet, sentimental song finally reveals a glimpse of the two men behind the curtain, gently pulling strings.